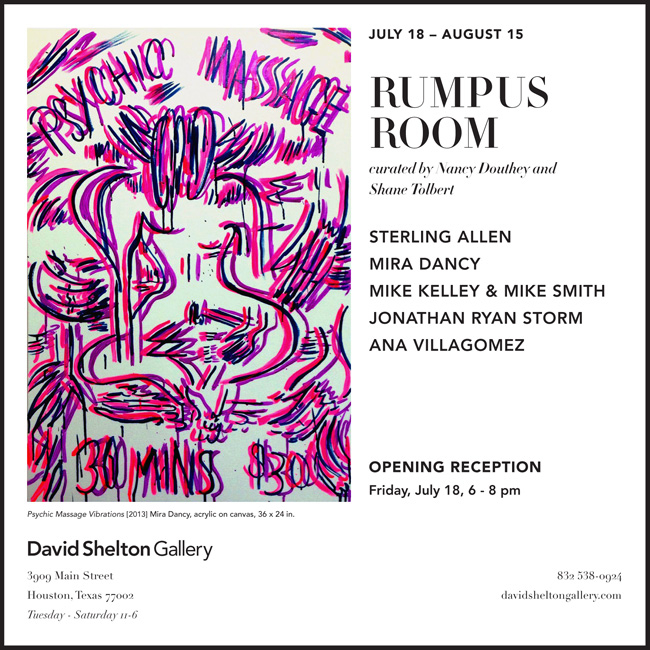 Summer’s back in Houston and damn it’s a hot one. School’s out and the traffic’s jammed and you’re in your car, listening to the asthmatic a/c compressor strain as you press on the gas pedal. Stop. Go. Stop. Go. Longing for “summer,” we’ve prepared for you a Rumpus Room. A room for formal investigations and informal meetings. A space for movements that are without interest of containment. Sprawl.

Storm’s shapes push against edges and bounce back, and then you consider how his intuition is coded and does it matter if it’s never unlocked? Dancy’s wild child protagonists, poised in lotus position, vibrate off the wall and you find yourself hypnotized in a fever dream. Don’t forget to hydrate. Wiggly wobble, Baby Ikki lives on the edge of teeter totter and crying screaming fits of frustration and in the cradle of comforting laughter and curiosity. Allen’s irregular, asymmetrical constructions of wood and reflectors align and abut and you find yourself stumbling over the traffic of toys. And if one falls where does one land? The dream of afternoon naps on mats outside the door where everyone else sleeps because you can’t stop talking – a soft thin mat that hardly separates you from the dirt of the floor. A pad for a tussle and a tumble. Villagomez wrestles you down. Get caught in the sticky, humid afternoon shower that blows through and find yourself drip-drying here in our Rumpus Room.

Sterling Allen (b. Farmington, NM 1981) received his BFA in Studio Art from the University of Texas at Austin in 2003. In 2006, together with eight other Austin artists, he founded and currently co-directs Okay Mountain. As a solo artist and in collaboration with Okay Mountain, he has exhibited and created numerous projects at venues throughout the United States and received several residencies including the Artpace International Artist-In-Residence Program in San Antonio, Texas. He recently completed an MFA in Sculpture at the Milton Avery Graduate School of Arts at Bard College. Sterling Allen is based in Austin.

Mira Dancy (b. UK, 1979) received her MFA from Columbia University in 2009, and her BA from Bard College in 2001. She has exhibited at Night Gallery in Los Angeles, and throughout New York and Brooklyn at venues such as Sara Metzler Gallery, Bull and Ram, Kansas Gallery, and most recently at Regina Rex. Mira Dancy is based in New York.

Mike Kelley & Michael Smith: This project was the only collaboration between Mike Kelley and Michael Smith, both acclaimed artists and friends since 1975. Mike Kelley (1954-2012) was born in Detroit and lived and worked in Los Angeles. He was recognized for work that is groundbreaking in its unorthodox embrace of performance, installation, drawing, painting, video, sound and sculpture. Michael Smith (b. Chicago, 1951) lives and works in Brooklyn, NY, and Austin, TX. Smith has been performing various characters over his 30-year career, including Baby IKKI, and has created works in video, television, exhibitions, puppet shows, comic books and drawings.

Ana Villagomez (b. Houston, 1991) received her BFA in sculpture from the University of Houston in 2013. Her work has been shown at Project Row Houses, galleryHOMELAND, The Joanna and Box 13. She is a 2013 recipient of the Dallas Museum of Art’s Clare Hart DeGolyer Memorial Fund Award. Ana Villagomez is based in Houston.

Special thanks to ARTPIX, Night Gallery in Los Angeles and Texas Gallery in Houston. 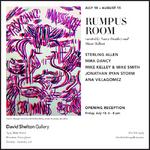