Born in a flicker of serendipitous synchronicity—Robert Hodge’s chance discovery of Black Paintings, a monograph published by Hatje Cantz charting the intensive studies of the color black undertaken by Mark Rothko, Ad Reinhardt and other members of the New York School in the late 1940’s—the works on display in The Low End Theory reflect both an engagement with the myriad formal and allusive qualities of the color, as well as an interrogation of the ramifications surrounding the double-entendre of creating a series of intentionally black paintings as an artist of color.

Grounded in the rich continuum of African American history and cultural expression, Hodge’s work celebrates resilience and reclamation, with his commemorations of African American musical and cultural icons serving to both preserve the past and illuminate the present. With a nod to “sampling culture” and Rauschenberg’s principle of working in the gap between art and life, Hodge’s collage-based works pair urban detritus and found objects with cut-out images, lyrics and other signifiers of the African American experience, forming a duality of meaning wherein fragments of everyday urban life become conduits of artistic expression. Cut, sewn, scorched and painted, Hodge’s work collapses the space between his reclaimed materials and the traditions he invokes, suggesting alternative pathways through the self-described layer cake of African American history. Often confined to the conventional paradigm of paint and canvas, the ground of Hodge’s work is arguably the very history he draws inspiration from, manifested in the patchwork materiality of his mixed-media assemblages.

Channeling A Tribe Called Quest’s The Low End Theory, the work in Hodge’s exhibition present a rarefied and refined formulation of his collage aesthetic, with much of the characteristically vibrant imagery of his work concealed by swaths of black paint. In many ways, these developments parallel the creative decisions that defined their album; stripping down the kaleidoscopic, jazz-inflected sound to a minimalist and elemental sonic palette that underscores the fundamental mechanics of bass and breaks, the trio uses devices of reduction to emphasize the spaces in between the music. In turn, in The Low End Theory, Hodge employs thickly applied black paint to reflexively conceal and reveal his surfaces, as if eulogizing the stories of those who slipped through the cracks of cultural memory.

The dynamic construction of Hodge’s works physically reflect the constant entropy and radical tactility of the urban environment. In Love Supreme and They tried to bury us they didn’t know we were seeds, compressed slabs of found newsprint, posters and other ephemera are emblazoned with their namesake quotations, burned into the paper support. The surface texture and patina of these works is simultaneously a testament to their messages of strength and resilience, as well as a reminder of the hardships and systems of oppression that mark life in contemporary America. In Too Legit to Quit, Hodge subjects his materials to environmental extremes: placed outside his studio for over five years, the piece has survived Hurricane Harvey, the harsh Texas sun and being run over by a car, physical ordeals that leave their own impressions on the work. In the artist’s own words, the piece “was not meant to be beautiful but brutally honest,” with its sutured and resin-dipped surface decrying a suppressed history of black pain and trauma, as well as the commercialization and marketing of such anguish. D is for Dilla, a memorial for J Dilla, a pivotal producer whose eclectic, MPC-driven sound provided the sonic backdrop for much of the underground and conscious Hip-Hop milieu, offers a moment of remembrance and reflection for the artist. Hodge relates his own practice of reclamation to the sample-heavy production technique employed by Dilla, and through the piece he pays homage to a kindred artistic spirit that did so much to honor and re-contextualize African American musical traditions.

Robert Hodge is an interdisciplinary artist whose practice explores themes of memory and commemoration. Born in Houston, Texas and raised in the city’s Third Ward district, he studied visual art at the Pratt Institute in New York and the Atlanta College of Art before returning to Houston. Hodge has exhibited his work in numerous national and international institutions and has also received grants from the Joan Mitchell Foundation, Houston Arts Alliance and The Idea Fund. His current projects include an album he executive produced called Two and 1⁄2 years: A Musical Celebration to the Spirit of Juneteenth and his traveling installation called The Beauty Box. 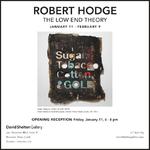