Misty Keasler's HAUNT is the most recent body of work from the artist's continued commitment to immersive photography projects. Keasler traveled across the U.S. photographing the interiors of 13 commercial haunted houses using long time exposures on film along with formal digital portraits of their actors in costume, in a portable studio set up on site. The subject matter takes photography to the edge of where it fails as a medium. Photographs are often used to document, yet the experience of walking through a haunted house is completely lost in each of the still images. The haunts (an industry term) appeal to multiple senses – sound, smell, extreme darkness, tense expectation – that do not translate visually. Additional effects such as fear frequencies (to unnerve guests at a biological level); darkening effects, like lighting a house almost entirely with flashes of lightning; smells, like the very distinct smell of death, or cheap perfume – and these sensory components are missing. The immersive experience just does not translate. However, what these photos give the viewer is a lingering look at the highly detailed tableau created by the proprietors of the haunts –something you would never be afforded as a visitor during their short season.

While the images appear purely documentary in their nature, there was intense digital post-production work involved. This was primarily to correct the oversaturated color caused by the lengthy time exposures. However, since the artist was relying on memory to make these adjustments, the feelings the spaces evoked also influenced the decisions that were made in the process to produce images that aren’t necessarily true to the film.

Ultimately, the contents of these photographs are made to instill fear as they are reflective of our culture. Haunts are not businesses that are ubiquitous, but rather indicators of a relatively high availability of leisure and safety – quite the opposite of the experience they promise. Each space is comprised of a very carefully and deliberately constructed artifice, beginning with the illusion of danger. The environments and characters make up a very specific portrait of our culture through fear.

Misty Keasler (b. 1978) is a Dallas-based photographer whose work has been exhibited internationally and appeared in publications including Harpers, the New York Times Magazine, the London Daily Telegraph, Time, Dwell, Esquire, D Magazine and Texas Monthly, among many others. Keasler’s work is often long term and has covered a diverse range of subjects from taxidermy to falconers to the communities living at the edge of garbage dumps. Her first monograph, “Love Hotels”, was a portrait of Japanese culture through the very specific institution of themed rooms rented by the hour and catering to a heterosexual male fantasy. The book was accompanied by a solo exhibition at the Museum of Contemporary Photography Chicago. Her second monograph, “HAUNT”, released in the fall of 2017, was accompanied by a solo exhibition at the Modern Art Museum of Fort Worth of the same title. Her work is included in the permanent collections of the Modern Art Museum of Fort Worth; the Amon Carter; the Museum of Fine Arts, Houston; the Museum of Contemporary Photography, Chicago; the Kiyosato Museum of Photographic Art, Japan; and the Dallas Museum of Art, among others. 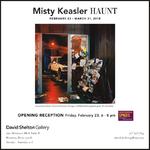