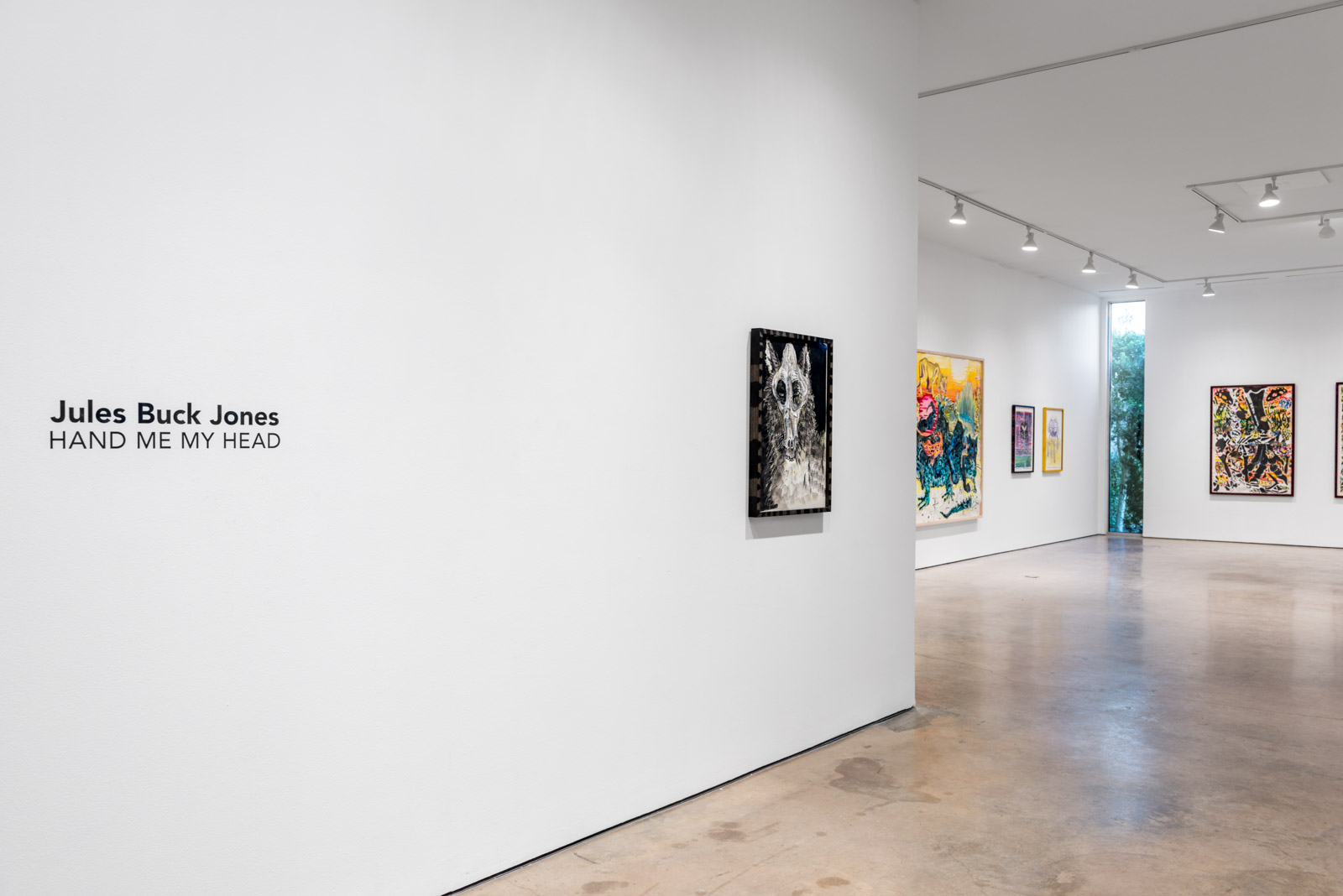 In his new exhibition, Hand Me My Head, Jules Buck Jones paints the liminal space between human and nature, past and present, life and death. Through the use of aggressive mark making, dense patterns, saturated color and the use of collage, Jones depicts scenes that are new and old, as well as natural and supernatural. Using his personal mythology, Jones paints nature in all its beauty, cruelty and mystery.

Many of the paintings in this exhibition depict the dichotomy between the power and fragility of nature, and the conflicting perspectives of humans and the wild. In the titular piece, Hand Me My Head 1, we see a wolf masked with it’s own skull. The title hints at the persecution of large predators with its invitation to destroy. The wolf emanates an energy resembling our own. As we look into the wolf’s eyes, we see the artist, we see ourselves.

Using a visual vocabulary that draws from the natural sciences and varied symbolism, Jones illustrates the infinite through bones, stars, animals and patterns. We see these elements combined and distorted in the form of creation stories and tales of mass destruction. In A Chicxulub Minute, we get a glimpse at an extinction event through a tessellation of exploding bones against a fire-red sky. In Ancient Laundry, set on a web of bright green light reminiscent of stained glass—evoking the jungle or the Sainte-Chapelle—we see a ghost beneath a spider, another layer, memories of previous times and incarnations. The skeletal structure, ring of birds, and ouroboros in Thing King together illustrate primordial unity, the infinity symbol, the simultaneity of creation and extinction.

Jules Buck Jones teaches painting and drawing at Texas State University. Since receiving his MFA at the University of Texas Austin in 2008, Jones has attended residencies at Skowhegan School of Painting and Sculpture, the Vermont Studio Center, Everglades National Park, Arrowmont School of Arts and Crafts and The Lighthouse Works on Fisher’s Island, NY. He is a founding member of the non-profit artist collective, MASS Gallery, and lives and works in Austin. This is his first exhibition at the David Shelton Gallery.